In search of a symbolism to be incorporated into the architectural design and which will be reflected on the particular location of the airport (Athens) in order to remain in the memory of the traveler, we believe that what one remembers from his passage from Athens is the Antiquities and the Greek spirit, the sun and the sea. We believe that we need to overcome common stereotypes for such a symbolism taking also into consideration that the new Extra Schengen Zone has been already developed on the subject of the olive tree, which encompasses all the concepts of the Greek civilization.
For the new site we choose the shell – κοχύλι of the Greek seas, this beautiful creation of creatures in the sea, reminiscent of the Greek summer that will leave a pleasant memory to the traveler and the desire to return. The shape of the shell covers the area of the Intra Schengen security screening and is visible from the departures hall, in which it necessarily protrudes, while at the side of the departures concourse it creates the entrances into the security control areas (normal and priority passengers). In the area of the departures hall the shell is a sculpture in space, inside the rectangular shape of the existing building.
In the departures concourse -security screening areas the passenger is inside the shell in a highly interesting area, which pushes him to explore and browse through it and simultaneously be distracted from the typical and boring waiting and control process.

Limitations Taken into Account for the Design
In the area of the security screening facilities, there are the following important limitations. The existing concrete double sheer walls, on axes L2/3A, and also existing concrete columns, escalators on axes K5-L/4, and the entrance to the Departure Hall (city side) on axes L/2. In the design area in general, existing vertical circulation cores and wet areas remain unchanged.
Security Screening Facilities
The new centralized security screening consists by two areas, the area for normal priority passengers and the CIP/ high priority passengers. The security screening units in the normal priority area are proposed in a semicircular arrangement, in order to avoid the existing concrete double sheer walls, on axes L2/3A. The passengers’ flow can be distributed more easily into two queue sections, on either side of the waiting area / pass control. The two queue distribution is recommended, since as per international practice a single queue should not serve more than 6 screening lanes.
The volume of the waiting when the queues are filled is not perceived completely by the passengers so as to avoid causing discomfort to the passengers. The exit of the screening units’ area is formed as a reception square to the commercial areas. The outer shell of the screening units’ area to the departures hall/ check-in area is configured as a second shell/sculpture inside the shell of the building, which unfolds towards the departure concourse hall and creates/marks the entrances to the screening areas (normal and high priority). The idea of the shell also unfolds through the commercial areas and is reconstructed in the floors and ceilings. The centralization of the security screening facilities in the Intra Schengen area creates a “clean area” for two levels of the departures. The passenger follows the route signaled to the gates, through the commercial units. Respectively, while waiting at gates, the passengers can visit the shops and the restaurants / cafes.
Commercial Area
The entrance to the commercial area after the security screening facilities is a central point-square area, which continues to the walk - through retail area. The retail area walkway has a minimum width of 5.50m and is marked on the floor area with a linear design and in the corresponding ceiling area with also linear luminaires that lead the way from the DF/TV units to the last minute shops. Vertical corridors lead to the departure gates waiting areas. The ceiling linear luminaires proposal is a strong sign which leads towards the departure gates waiting areas, and is continuously detected by the passenger inside the commercial area, so as not to feel stress in search to the exit to the gates. A second square is created in the food court area, and also additional sitting areas along the retail walkway. The DF/TV units are open-space areas and the furniture fitting follows the overall floor design, while the specialty retail units are independent shops with areas between 15,00m2 and 100m2, possibly with some larger anchor units. 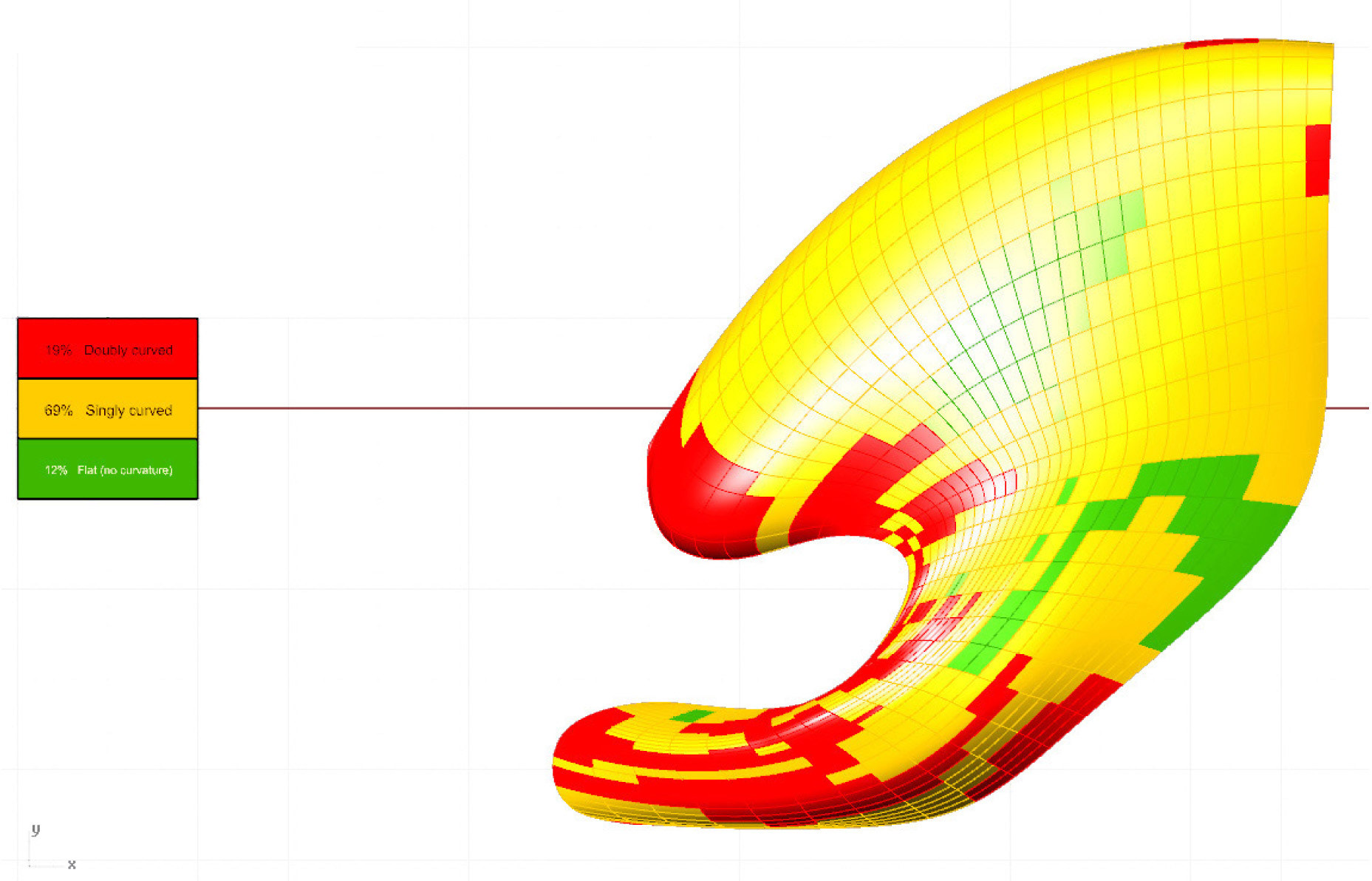 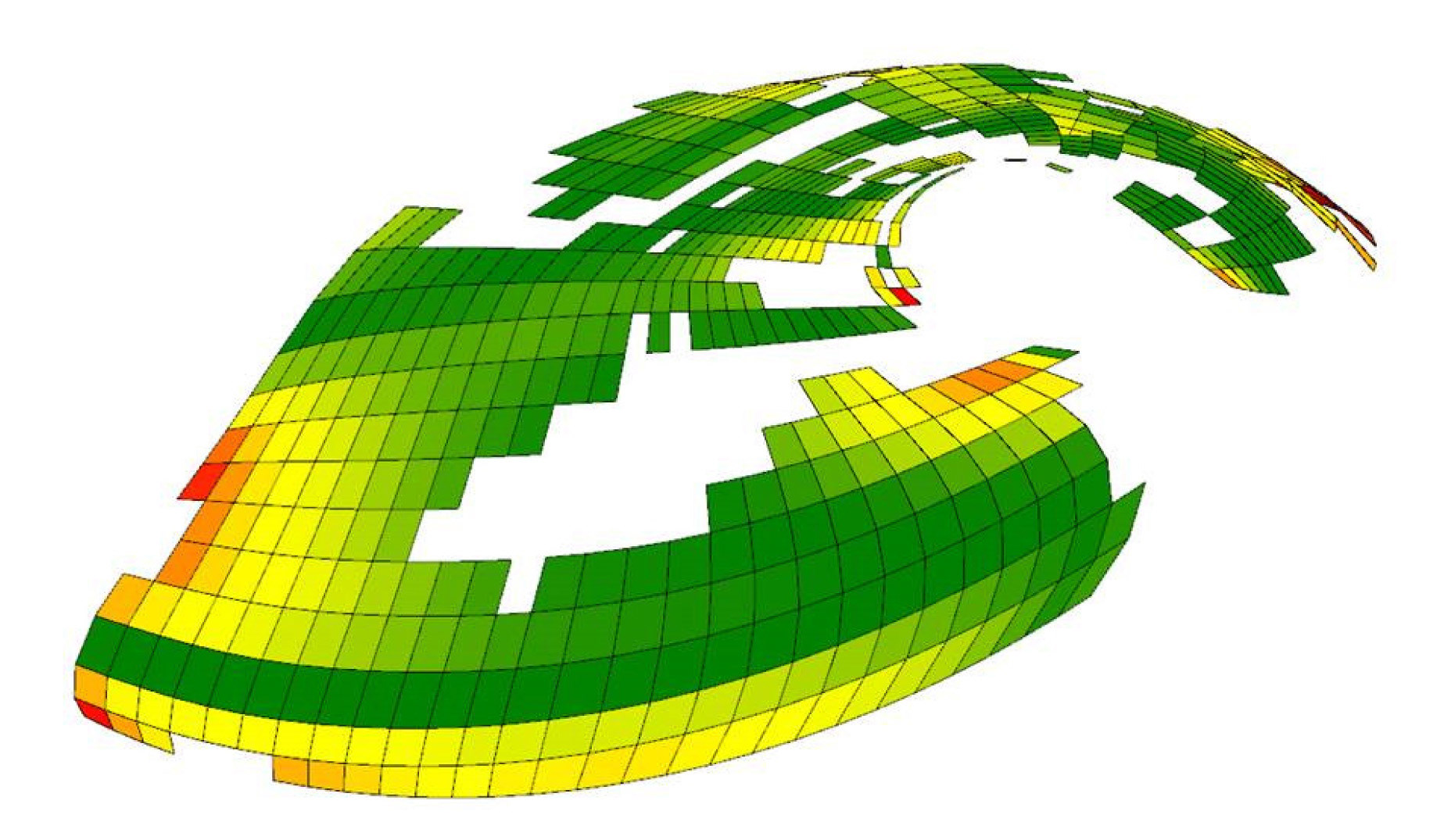 The form of the structural skeleton and the selection of the materials composing the structure will be driven by the architectural concept design. The load-bearing members will follow a grid pattern the geometric shape of which will enable the effective transition of axial forces. The curvature of elements and the angles between them will be such that the members will be primarily subjected to compression, while shear and bending stresses will be minimized.
For this purpose analyses to determine the geometry that lead to the optimum load path will be undertaken. Regarding the construction of the grid shell, different materials will be considered. These will include thin steel sections, timber and composite materials (e.g. fiber reinforced polymers, etc.).
The decisions made will not only rely on the overall structural capacity achieved by the use of certain materials, but will also depend on factors such cost, previous experience of contracts on similar constructions, local availability of resources, needs for maintenance, sustainability etc. Emphasis will be given  on the design of a lightweight structure that will safely carry the dead, live and seismic loads prescribed in the building regulations.